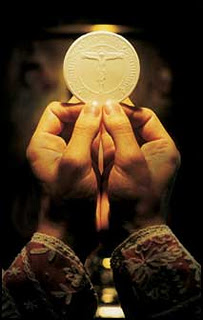 Having attended Mass at St. Elizabeth Ann Seton these past two weeks, you may have heard Fr. Cole or me address a situation that we have been made aware of over the past several weeks. Heartbroken and with tears in their eyes, we have been approached by parishioners with open hymnals. What has caused the tears has been their discovery of the Body of Christ, partially consumed, stuck between the pages of a hymnal. After another incident this past weekend, I invited our NET Team (National Evangelization Team assigned to SEAS) to open and search all of the hymnals. We discovered about 30 hymnals containing the Body of Christ.

At Mass we receive the Body, Blood, Soul and Divinity of Christ. Jesus Christ gives His life—not to be placed within a book—but within our soul. In light of this desecration of the Holy Eucharist, our parish has suffered with Christ. Let’s remember Who we are receiving within the Consecrated Host.

I am sharing with you this sad information to remind us that not everyone respects the gift that Jesus Christ and His Church is giving to us. While we may be brought to tears literally— as have parishioners who have brought me these hymnals—please remember that when we miss Mass, we also risk misleading our children. Our absence at Mass may lead our children to think that Jesus is also absent in our worship.

To address this situation going forward, please teach by example. Honor the Holy Will of God and the Divine Gift of the Holy Eucharist and make the commitment now to never be absent from the celebration of Sunday Mass again. Regarding each of our liturgical ministries, special instructions are being given to our Extraordinary Ministers of the Holy Eucharist, Ushers and Sacristans to address this heart-wrenching concern.

If you have any questions regarding this message, please feel free to speak to Fr. Cole, Megan Pleviak, our new Director of Worship, or myself.

This is terrible. A few years ago the same discovery was made at a neighboring parish in South Minneapoli. It was attributed to the school Masses and the kids not being properly catechized. I never think to go through hymnals - but maybe I'll start doing so.

I think the priest makes a good point when he says "Our absence at Mass may lead our children to think that Jesus is also absent in our worship." Couch potato Catholics aren't exactly teaching their kids by example.

Wow. It's hard to even imagine. & it's very true about missing Mass as well. God bless!

Well, Father, situation can be easily remedied: Holy Communion distributed by ordained hands ONLY. Restore the communion rail and require communicants to receive while kneeling and on the tongue. Holy Communion under both Species reserved for very, very special occasions.

Whenever this suggestion is made, those hearing it invariably walk away muttering--much like that fellow in the Gospel story.

So much is at stake here, stop muttering and just do it.

I agree with William. "The parishioners will only be as holy as their priest is holy"...St. John Vianney, Patron of parish priests.

Something sadly similar happened at my parish some years ago, shortly after our new pastor arrived. He used this terrible sacrilege as an opportunity to plead with the parish to receive Holy Communion on the tongue. Many acquiesced to his request. My pastor also came to the realization that this outrage was most likely taking place at weddings and funerals, which are more likely to attract lapsed Catholics than a Sunday Mass. Thankfully, we have not had a profanation since. I know that it's possible for someone take the Sacred Host out of their mouth if they are intent on profanation, but it's not as easy as it is to do with Communion in the hand.

While I agree with William, in some cases (and I'm not speaking about the situation here, but a similar situation) the Eucharist is in someone's mouth and taken out again, left on a pew, on the floor, etc. In that case, receiving on the tongue doesn't necessarily resolve the issue.

Hmm, yea, if everyone were to receive Holy Communion at the rail and on the tongue, such a thing couldn't possibly happen.

Another problem with reception on the hand. The eucharist is not a snack at the end of Mass if you sat patiently through the sermon. This is defilement.

Also this is what the ushers are for...