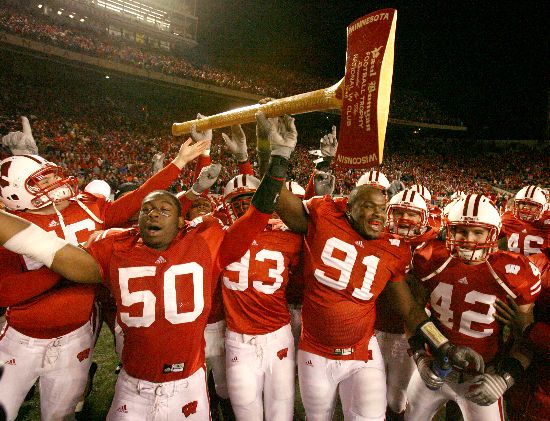 We got it and we want to keep it.
Posted by Badger Catholic at November 12, 2011

Hey Dave - maybe you didn't hear about this...but...Michigan State beat Wisconsin this year. Did you know that? I thought I should let you know, just in case you didn't know...

Hey Lenny, as you can see, beating lowly Minnesota has become a priority in Badgerland.

That is 1 trophy I am glad to see that Minn doesn't have. I supposed the Badgers will keep it next to the Heartland trophy which they were lucky to win last year & we have to wait until 2013 to get back. Ditto on it being pure luck that the Gophers have Floyd of Rosedale.

Al, one of my biggest complaints about the new Big10 divisions was that Iowa and Wisconsin didn't play every year. That's one of the best rivalries in the conference, and now they don't even play every year.

OK - Time to re-set. I found this site by accident and I've commented on the old Cathedral in Crookston, MN and the pro-abort/ex-nun coming to Badgerland to receive an award for being an idiot.

When it comes to ripping Minnesota (aka the Gophers, Vikings, Twins) the gloves come off. The Gopher football program may be in a long-running rut - but that's cyclical. Wisconsin football was a joke until Barry came on campus. He saved the program and elevated it to where its at today. While riding the wave of success keep this in mind Badger Catholic. My grandpa gave me this sage piece of advice many years ago.....be nice to the people that you pass on the way up - you'll be seeing them again, on the way down.

Humble....be humble in good fortune, whether in the sports world or in any of the many blessings that the good Lord provides.

Ha, Anon, only tongue and cheek. You might like to know I spent much of my youth in Minnesota, and my children all have Twins shirts. But many readers do not know of the storied traditions of Big 10 rivalries, hence the point of the post - not grinding the axe just showing it off. I would certainly expect the ebb and flow of success to head back in Minnesota's favor in the future.

Matt, I agree. Certain rivalries must be kept going annually, not every 3-4 years. IMHO the Big 10 is just getting too big. Sort of like when the Big 8 became the Big 12, although they have only 10 teams now. Maybe the 2 conferences can exchange names?
Anon, I am a Twins & Vikings fan, but when it comes to college football, Floyd should be spending more time in Iowa.