Sometimes apparitions do *not* get approved 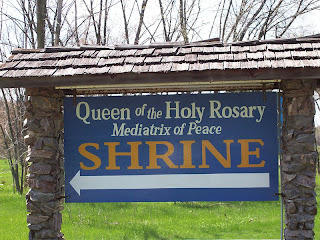 Thus far, the church has only approved about 12 Marian apparitions worldwide, said Roten, with Lourdes, France and Fatima, Portugal among the most famous. Others -- including some in the U.S. -- are under investigation, Roten said, but declined to name them. [Our Lady, Queen of America for one.  Anyone know of others?]

"You don't want to start publicizing things because you are not sure they will go anywhere," said Roten.

Alleged apparitions in Bayside, N.Y., Emmitsburg, Md., and Marlboro Township, N.J. were investigated and declared false by the church.

In the 1950s, a farmwife's visions of Mary in Necedah, Wis., about 150 miles southeast of Champion, attracted one of the largest religious gatherings in the state's history, said Sandra Zimdars-Swartz, a scholar at the University of Kansas. The church, however, dismissed the Necedah apparitions. [Then-Bishop Raymond Burke in 1998 affirming the interdict placed by Bishop Freking in 1975.  Some background.  I was going to do a post a while back on this and it seems timely that I start putting it together.]

In general, the Catholic Church approaches stories of supernatural visions with a mixture of excitement and caution, scholars say.

On the one hand, mystical experiences can inspire believers and spark vast spiritual movements, such as in Mexico after the Virgin of Guadalupe reportedly appeared to peasant Juan Diego in 1531. Millions of pilgrims -- particularly Catholics -- trek to Lourdes and Fatima each year.

But Catholic leaders are also wary of hoaxes, ridicule and diviners who boast of a hotline to God. Hundreds of visions -- from spotting Jesus in a grilled cheese, to weeping statues, to more sustained spiritual experiences -- have been reported and dismissed over the centuries.

"I think the church quite properly plays a waiting game," said Brian Britt, a professor of religious studies at Virginia Tech University. He compared the long lag time in approving apparitions to the church's lengthy process for canonizing saints. Better late than wrong, is the prevailing ethos.

"Once the visionary is dead and gone, if the pilgrimage site continues to have meaning and value for the church it becomes less risky," Britt said, "and even sometimes desirable for the church to offer its endorsement."

This makes the visions of Sister Adele Brise all the more astounding because they did pass the test.
Posted by Badger Catholic at December 17, 2010

Bishop John Treacy of the La Crosse Diocese declared the Necedah Apparitions to be false in the late 1940s and the Vatican backed him up. I think this was in 1947 or so. Apparently Bishop Burke had some dialogue with the people from the Necedah Shrine and promise a Diocesan Marian shrine. That is where the Guadalupe Shrine comes in. Bishop Burke wanted to buy the old Dominican cloistered monastery in La Crosse to be used as a Marian diocesan shrine but Riverfront refused to sell. The Swing Family stepped in and donated the land.

The territorial Bishop will NOT promote Medjugorje as a 'valid' apparition, but it may still be 'under investigation.'

I'm pretty convinced Medjugorje is a great big fake. That is to say they might have seen something but it sure wasn't the Blessed Virgin.