1. Americans as a whole love abortion.  It is normal.  It is good.  It is healthcare. The Democrats booed God at their convention and promoted abortion repeatedly, and got elected.

3. Catholic bishops have no voice in the political arena.  Despite 11th hour realization that the party they built is ready to devour them, any effort to rally Catholics fell on deaf ears.  Catholic states once again voted in this president at a rate of 50-48%, even if they are nominally Catholic that is a total failure.  Even if Obama were to start shutting down Churches or exiling priests, Catholics would continue to vote for him.  That's how bad it has gotten.

4. Heretical nuns may have much more influence that first thought. Sure, when I look at them it's hard to take any of it seriously, but clearly some do.  The bishops' gentle approach just cost the Church in America permanently.

5. Catholic institutions already pay for contraception and make millions hooking kids on it.  If a president mandates it or a bishop looks the other way, does it make a difference?  The HHS mandate was already the law of the land in several states prior to this administration, Catholic or not. Since no one cared then, why should we expect anyone to care now?  Time to start at square one, say it with me, contraception is intrinsically evil.   Catholics should never be "neutral" about intrinsic evil.  Contraception IS the issue.

A few things to put in perspective.

2. Abortion numbers have stayed the same whether a Republican or Democrat are in office.  During George W Bush's 8 years, the average number of abortions stayed steady at 800,000 - 850,000 per year.  The best argument for voting Democrat is that even though Republicans say they are pro-life, they don't make any real changes.  Did George W Bush ever attend the March for Life in person?  40 years of abortion and almost that many for Title X funding.  Still no substantial changes.

3.  Conservatives need to start thinking as federalists.  Washington DC should not solve every problem.  Personhood legislation is a great example.  Now if Republicans (or even the mythical pro-life Democrat) would start talking about them.  Quite frankly, secession from the union should be on the table if necessary.  Prior to 1973, sanity was more popular 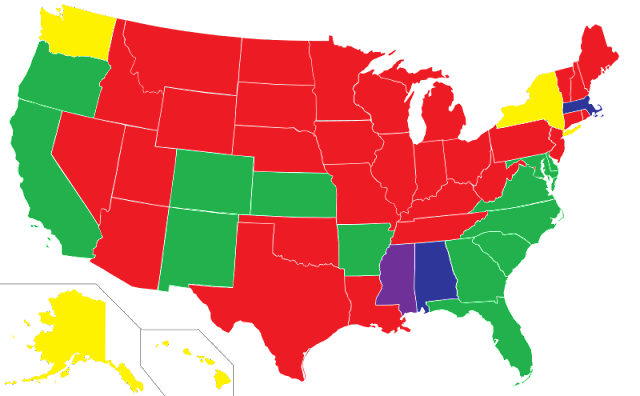 Abortion laws in the United States prior to Roe vs. Wade

4.  Part of me always hoped that a state like Texas with a strong identity would make an act of secession.  After the dust settled, I think I would find a job and move there. Point being, every now and then the "nuclear" option is hinted, but really, what would it take?

5. Democrats run a better campaign.  Someone on Twitter thought I was being fanatical when I said that the Democrat machine wins close elections because they can manufacture votes.  I'm not saying they did anything illegal necessarily(although we know that happens).  What I'm talking about is this which Steve shared: How Romney got out-organized by Obama

Email ThisBlogThis!Share to TwitterShare to FacebookShare to Pinterest
Labels: Election 2012

"On the other hand, Romney did not talk about social issues."

That's not true. Romney ran an ad here in Wisconsin reaffirming his support for abortion "rights" and mandatory insurance coverage of contraception which I saw many times, and nearly vomited each time....

It was this one: http://www.youtube.com/watch?feature=player_embedded&v=jXQL9WLKXMo#!

"Americans as a whole love abortion. It is normal. It is good."

As Fr Z has stated many times, abortion is a "sacrament" for the neo-pagans.