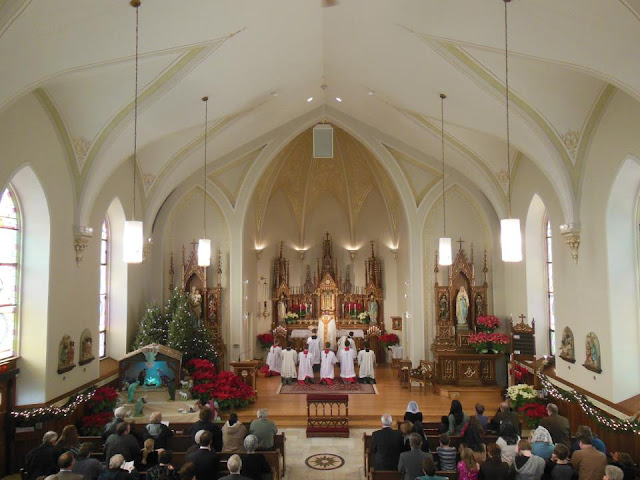 
It’s official. St. Mary of Pine Bluff became a parish that celebrates the Novus Ordo ad orientem at all of their Masses.

After a year of celebrating daily Masses ad orientem, we wondered when and if we would take the next step to celebrate all of our Masses this way – including weekend Masses. Then came the December 6, 2012 homily by our own Bishop Robert Morlino (listen here). In his homily, our bishop was actually encouraging ad orientem worship. Of course this was all the incentive we needed – or, was it?

We didn’t make a full commitment. Instead, we DID celebrate weekend Masses ad orientem, beginning the very next weekend. However, we saw this as a kind of “test drive”, as we were willing to revert back to versus populum, if the pushback became too severe.

The reaction was overwhelmingly positive (at least from those who voiced an opinion). And so, I made the decision to use the great feast of Epiphany, in which we see the Magi journeying toward the star they saw at it’s rising (in the East), to teach on “ad orientem.”

Again, the response was overwhelmingly positive. We are now officially a parish that celebrates all of their Novus Ordo Masses ad orientum.

That would be a first in this state for any diocesan parish.

This is great to see. Mass ad Orientum is the unbroken tradition of the Orthodox Church. Nice to see such a fine ecumenical gesture, I am sure all the Spirit of Vatican II people will join in rejoicing about this!

There is a manly aspect to this orientation during the Holy Sacrifice which is undeniable. Indeed... it is that masculinity of Christ which is conveyed once the priest is praying WITH the people and no longer praying AT the people which will attract young large families (just as the EF is attracting young large families in France, England and Germany right now).

It is also important to note that Gregorian Chant is essentially mandated as the principal source of Sacred Music at Mass per Vatican II's document on the liturgy.

Since most of the Gregorian propers are available online for free now... there is no reason to go untrained or un nourished in thes. I'm always amazed at my own church to see 8 year old boys and girls singing in the schola along with 40 year old chant experts. With a little effort during the week... and a little encouragement from mom & dad... children can actually sing the Latin propers. Those Latin propers become such a RICH part of your memory that young people learn them faster than they learn present day music of the modern culture.

Though I grew up with what we now call the Ordinary Form of the Mass... I have to say that my family and I greatly prefer the nourishment of the Latin propers and Ordinaries (like the very simple Mass of the Angels) to the antiphons or English propers. It's something worth working towards.

The reason that the response was "overwhelmingly positive" is because the parish has obviously already gone through a filtering phase (Fr has been there at least 6 yrs) where the progressives got fed up and left long ago.

A priest in the La Crosse diocese tried this with proper prior instruction and a parish group complained to the bishop. While Callahan didn't order him to stop (he couldn't by law), Callahan did "encourage" him to stop for "parish unity".

The fight for the Church in America is going to have to be at the parish level like this, where there will be increasingly orthodox parishes that attract orthodox refugees and the rest of the parishes will go to hell.

Cassandra, I would love the details, will you email them to me? matt@badgercatholic.com

a great place to start implementing ad orientum would be at campus ministry churches, college freshman don't have all the "emotional baggage" with this stuff that same baby boomers have.