Winona, MN - March 25, 2013 - Mayo Clinic announced this morning in a news release that Saint Mary's Hospital will be fully integrated into the Mayo Clinic Hospital System and will no longer be designated as a Catholic health care institution. Saint Mary's Hospital along with Methodist Hospital will transition to a single licensed hospital operating under the name Mayo Clinic Hospital – Rochester. This change will be effective January 1, 2014.  [fyi, Methodist performs abortions]

The discontinuance of the Catholic identity of Saint Mary's Hospital is a loss to the people of Rochester, the Diocese of Winona and to the wider community. A Catholic health care institution has the unique mission to continue the healing ministry of Jesus Christ, and to give public witness to the moral and ethical principles that flow from the foundational truth, that every person is made in the image and likeness of God. The Catholic Diocese of Winona is deeply grateful to Mayo Clinic for having sustained the Catholic identity of Saint Mary's Hospital since 1986, when Mayo Clinic first began the integration of Saint Mary's Hospital into its health care system. It is unfortunate that government regulations, accreditation requirements and reporting requirements influence a health care institution’s decision to no longer maintain a Catholic identity but it is a sad reality of our current times.

In commenting on the announcement by Mayo Clinic about the change in the identity of Saint Mary's Hospital, the Most Reverend John M. Quinn, the Bishop of the Catholic Diocese of Winona, issued the following statements: “While Saint Mary's will no longer be an official Catholic hospital, it is encouraging that Mayo Clinic will continue to observe the Ethical and Religious Directives for Catholic Healthcare Services, will infuse Franciscan values into the care of patients, and uphold the legacy of the Sisters of Saint Francis who founded  the hospital in 1889. Also, the religious art and symbols will remain throughout the hospital.” 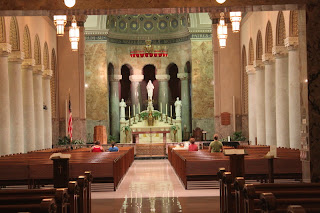 Mayo Clinic has communicated to Bishop Quinn that it has no plan or intention to relocate clinical services[abortion] prohibited by the Ethical and Religious Directives for Catholic Health Care Services to the Saint Mary's Hospital Campus. In light of this and a signed Memorandum of Understanding among the Bishop of the Diocese of Winona, Mayo Clinic and the Academy of Our Lady of Lourdes (Sisters of Saint Francis) , the chapel at Saint Mary's Hospital will remain a Catholic chapel, with the Blessed Sacrament present and Mass offered daily.

“Mayo Clinic has earned a worldwide reputation for excellence in patient care and medical research, and plans to honor the values that have characterized St. Mary’s Hospital for over 130 years,” stated Bishop Quinn, “I urge all Catholics and everyone to continue to pray for the doctors and staff of the Mayo Healthcare System; that God continue to bless the good work that they do to care for His people.”

Rochester, MN - March 20, 2013 - For more than 130 years, the Sisters of Saint Francis, Rochester Minnesota have a shared history with Mayo Clinic. Together, we have been able to serve the health care needs of thousands of patients. Saint Mary's Hospital has been very much a part of the Sisters’ lives. Even in the early days, Sisters were known to give up their own personal beds when there were more patients than hospital beds. Today, we stand in a different place, but on the same holy ground. We still maintain a presence, but in a different capacity.

The unification of Saint Mary's Hospital and Methodist Hospital into a single licensed hospital and into a single legal entity is but one factor in response to the ongoing changes in healthcare that has continued to evolve over many years. The Sisters are sad to realize that the newly merged hospital will no longer be an official Catholic health care institution. But although the Catholic identity and the name of the hospital will change, much will remain the same. The chapel shall continue to be used as a Catholic chapel, a public place of worship available to patients, their families, employees, and local residents.

The Sisters of Saint Francis and Mayo Clinic will continue to work together to perpetuate the Franciscan Mission and the values of Mother Alfred Moes and Dr. W.W. Mayo. The Sisters of Saint Francis are rooted in Gospel and Franciscan values, impelled to act courageously on challenging issues for the common good of all. We Sisters believe in the power of prayer and are sustained by the belief that God’s presence is with us in the decisions we need to make. We have great trust and hope for the future of the Mayo Clinic health - care system.

Will post thoughts later.  I've heard reports doctors have pressured women to get abortions in "high risk" situations.  Certainly things are going downhill, but whether the cause is Obamacare or fear of lawsuits or just a way to improve the bottom line, I'm not sure yet.

Haha, I'm getting a great visual of her standing out in front waiting for someone to just try to drag her out of there.