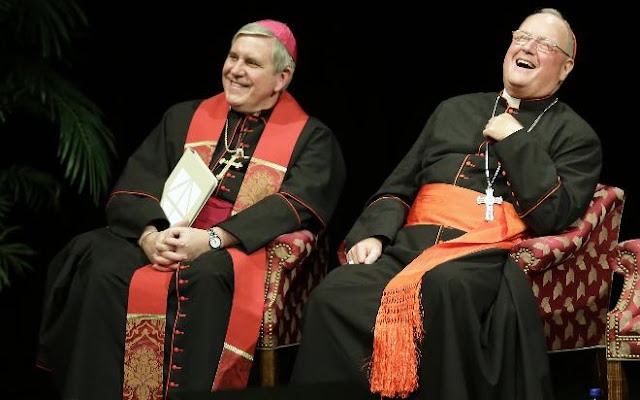 New York Cardinal Timothy Dolan called on Milwaukee-area Catholics Thursday to embrace the church as their spiritual family — despite its flaws — and to fight those forces in the secular culture that would seek to destroy it.

"Are you prepared to defend your faith from those who would take it from us?" Dolan asked an enthusiastic and near-sold-out audience at the Milwaukee Theatre.

"These liberators might be the late night talk show hosts, classmates of our kids ... or editorial page journalists who misunderstand the beauty of our Catholic faith," he said. "Are we prepared to engage them ... to live and die for the church? That, my friends, is apologetics. And that, my friends, we need more than ever."

The former archbishop of Milwaukee and one of the nation's most influential American prelates was the featured speaker for the Archdiocese of Milwaukee's 10th annual Pallium Lecture series, which he founded during his tenure here. Thursday's talk, which stressed the beauty and mystery of the church, as well as its sins, gave local Catholics insight into Dolan's role as the Vatican's point man for what it calls the new evangelization to spread the faith.

Note well: "Archbishop Jerome Listecki started the evening with a prayer service, which with the choir took on the air of a high liturgy."

A standing ovation welcomed New York Cardinal and former Milwaukee Archbishop Timothy Dolan and back to Wisconsin
Posted by Badger Catholic at September 09, 2013

Regarding what the choir sang, I'd be curious to hear from someone who attended. Was it high baroque, or high Marty Haugen?

I wouldn't read too much into the "high liturgy" line. I doubt the author of the JS article knows what a "high liturgy" really is. They could have sang 'On Eagles' Wings' or 'Lord of the Dance' really elegantly. (haha) Who knows... maybe I'm wrong, but I doubt it was Latin Mass high liturgy. Neither Listecki nor Dolan are in that camp.

I'd take chanted Evening Prayer(LOTH) in English as a good sign.

I agree though, I'd love to know to what Annysa was referring.

What I want to know is whether ++Dolan is ready to live and die for the Faith.
A little leadership by example would be appropriate.

That's our Tim....everything is a joke...hardy har har.....The people from Milwaukee, who know their Faith and love the Church are not fooled by him. He was mean and nasty towards any kind of traditional Catholicism. He is nothing by a shallow opportunist.....and still all of Weakland's people are in place in Milwaukee. When will any change come???

The specifics in the program regarding the music were:

Psalm 72, Justice Will Flourish in his [sic] Time, Michel Guimont;