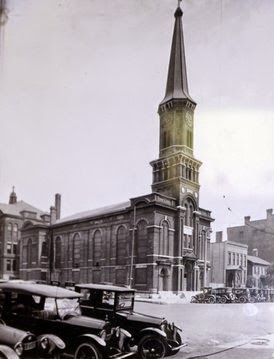 MILWAUKEE -- The first Catholic Mass to ever be broadcast over the airwaves wasn't in New York or Chicago, it happened right here in Milwaukee.


On April 12th, 1953, Father Schwab spoke into his microphone at the pulpit of Old Saint Mary's and his voice went out, not only to those sitting in the pews, but the radio listening public.

Built in 1846, Old Saint Mary's is the oldest church, of any faith, in the City of Milwaukee. Originally a German-Bavarian dominant congregation, the story goes it was built at the urging of wives who were opposed to the idea of sharing a church, St. Peter's, with an Irish population, particularly Irish women.

At the time, the parish didn't have enough money for a new church, so these women, members of the St. Anne's Society, baked the bricks themselves while they baked their bread. Construction started in 1843 and finished three years later. For many years, the church was home to Saint Mary's School, and the actual church rested at the balcony level, with the classrooms underneath, until 1867 when the school was moved to a different part of the building. The school was closed in 1927.