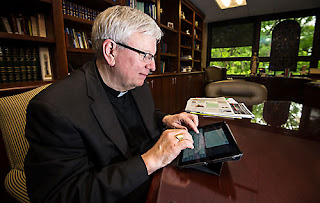 GREEN BAY — Like it or not, social media is here to stay. And according to Bishop David Ricken, if you want to be relevant to the current generation, you have to be in those places. That’s exactly what some priests in the Green Bay Diocese (and Bishop Ricken) are doing.

“There were enough people who had seen my homilies on my personal Facebook page, and they seemed to like to be able to read them, so I thought that would be a good thing to do with my daily homilies,” Fr. Wideman said.Fr. Brian Wideman, 39, parochial vicar of Sacred Heart Parish, Appleton, was ordained in 2014. He admits to not being much of a social media user before. Now he posts his daily and Sunday homilies on his Facebook page under the name Fr. Brian Wideman and his blog, fromtheambo.blogspot.com.

He said other people use social media more as an evangelizing tool, but it is not a substitute for interpersonal communication.

“Social media can be helpful, but it doesn’t ever replace the personal encounter that we have with Christ and others,” Fr. Wideman said. “So many people have their faces buried and their hands busy on their phones, so it’s almost like you have to put that out there because that’s where they are.

Bp. Ricken is a good follow.  Out of the Illinois bishops, Bp. Jenky is a good follow as well.  The entire Diocese of La Crosse doesn't even have a Facebook or Twitter account, so there's many that are still behind the curve.
Posted by Badger Catholic at July 02, 2015