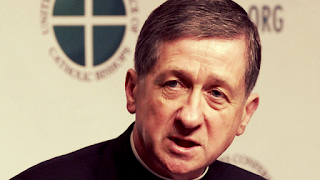 The release of videos of Planned Parenthood physicians discussing the market for tissue harvested in abortions has produced varied and strong reactions, and has, ironically, given us a reason for hope and an opportunity as a nation.

The tapes have generated a visceral reaction independent of how they were made or whether Planned Parenthood was making a profit. Rather, the widespread revulsion over the tapes arose because they unmasked the fact that, in our public conversation about abortion, we have so muted the humanity of the unborn child that some consider it quite acceptable to speak freely of crushing a child's skull to preserve valuable body parts and to have that discussion over lunch.

Yet, the outrage expressed by many at the physicians' callous and flippant attitude toward trafficking in human body parts is evidence that American hearts have not been irreparably hardened by the steady devaluing of human dignity in our society.

Bravo and thank you Abp. Cupich!

Update: You may want to just stop reading after this lead section.  He invokes the Dogma of the Seamless Garment:


While commerce in the remains of defenseless children is particularly repulsive, we should be no less appalled by the indifference toward the thousands of people who die daily for lack of decent medical care; who are denied rights by a broken immigration system and by racism; who suffer in hunger, joblessness and want; who pay the price of violence in gun-saturated neighborhoods; or who are executed by the state in the name of justice.

Read that?  We should be no less appalled.  What an absolutely brutal statement, like comparing the atrocities in German in concentration camps, to the "rights denied immigrants."  Last time I checked, immigrants were not being dismembered and sold for their body parts.

.@ArchbishopBlase "Not all moral issues have the same moral weight as abortion and euthanasia." - Benedict XVI
— Ignazio (@IgnazioChicago) August 3, 2015

The seamless garment implies that different issues affecting life shouldn't be ignored, but it doesn't imply that abortion is some how not more severe than misuse of environmental resources.

I disagree, clearly the archbishop makes the equation.