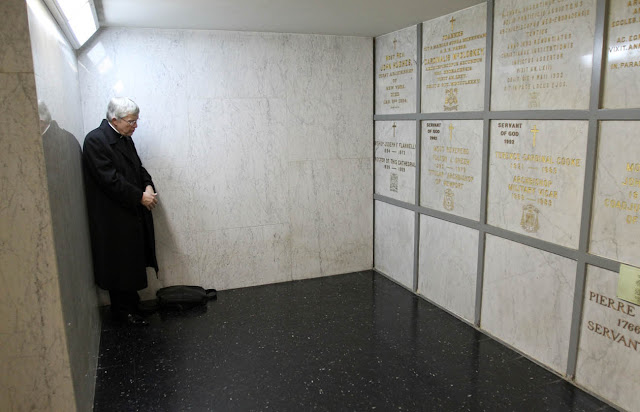 PEORIA, Ill. (CNS) — The Supreme Court of the State of New York ruled Nov. 17 in favor of the family of Archbishop Fulton J. Sheen regarding their request to allow the transfer of the sainthood candidate’s remains to Peoria, where he was raised and ordained a priest.

On Nov. 1, Manhattan Supreme Court Justice Arlene Bluth heard arguments in favor of the transfer from lawyers for Archbishop Sheen’s niece, Joan Sheen Cunningham, as well as those from the Archdiocese of New York, which sought to keep the remains of the famed orator and media pioneer at St. Patrick’s Cathedral in New York City, where he was entombed following his death on Dec. 9, 1979.

The Diocese of Peoria has been a promoter of Archbishop Sheen’s canonization cause for more than 14 years. The ruling is seen as a key factor in allowing his cause to move forward. There was no immediate response from the New York Archdiocese.

“The petitioner (Joan Sheen Cunningham) is granted the right to remove the remains of Archbishop Fulton J. Sheen from St. Patrick’s Cathedral in New York … to St. Mary’s Cathedral (in Peoria),” ruled Bluth at the close of a 10-page decision.

Wow.  Hopefully and end to a strange episode in the cause for Abp. Sheen.
Posted by Badger Catholic at November 18, 2016

I wonder why this wasn't settled in an ecclesial court instead?

The habitual delicacy of Cdl. TM Dolan makes him invisible in the narrative. Oh, some trustees will be carrying the NY appeal forward...not Himself. Jenky and Dolan are in a pitched battle. Dolan needs to keep Cathedral revenues up to retire the huge renovation cost. More gifts in the gift shop and more smoke and smudge from the racks of votive lights. (By the way, "America's Parish Church" has no public restrooms. How did they ever make space for the gift shop?)