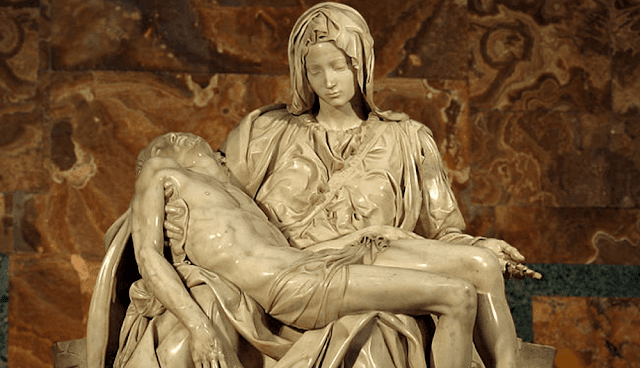 The National Shrine of Our Lady of Good Help and Arte Divine, in conjunction with the Diocese of Green Bay, today announced that a life-size marble casting of Michelangelo’s ‘Pietà’ was placed at the National Shrine, 4047 Chapel Drive, Champion, WI on Tuesday, September 25nd. The Carrara marble, exact casting of Michelangelo’s masterpiece, Pietà will be the 47th of only 100 authorized to be created and placed.

Five hundred years ago Michelangelo unveiled what would come to be regarded as one of the world’s great masterpieces of inspired art and perhaps the most beautiful sculpture ever created. The Pietà was both the consummate expression of Michelangelo’s artistic abilities and an embodiment of the Divine inspiration that guided his work.

This famous work of art depicts the body of Jesus on the lap of his mother Mary after the crucifixion. The Pietà is the only piece of art Michelangelo ever signed. Arte Divine has recreated Michelangelo's masterpiece, Pietà in cast marble using a mold derived from the original Pietà c1498-99, St. Peter’s Basilica, Vatican City. This posthumous Pietà is a precise “1 to 1” casting that is faithful in every detail to Michelangelo’s original. These exquisite castings are being acquired by generous corporate and private benefactors, and donating these legacy gifts to select Catholic Cathedrals, Churches, and landmark locations like the National Shrine of Our Lady of Good Help.

“What a blessing to have been gifted one of the greatest works of religious art ever created,” said Fr. John Girotti, President of the National Shrine. “We are blessed to be able to share this iconic image of our Christian faith with our many pilgrims, an image that so beautifully depicts the compassion and refuge offered by our Blessed Mother.”

The Pietà was gifted to the Shrine for its new sanctuary and events center scheduled to begin construction this fall and completed in the spring of 2019. Until then, the statue will reside in the 1941 Chapel.

“We are truly grateful to the Follett Family for sponsoring the placement of Michelangelo’s masterpiece at the historic Catholic landmark, the National Shrine of Our Lady of Good Help,” said Pat Kerivan of Arte Divine.

“It is Arte Divine’s mission to place Michelangelo’s Pietà in 100 sacred and secular settings around the world. In so doing we hope to elevate the hearts and minds of millions of the faithful who will never have the opportunity to travel to Saint Peter’s Basilica in Vatican City, Rome and personally experience the transcendent beauty of this Divinely inspired work that is Michelangelo’s Pietà,” Mr. Kerivan added.
Posted by Badger Catholic at September 25, 2018

Email ThisBlogThis!Share to TwitterShare to FacebookShare to Pinterest
Labels: Shrine of Our Lady of Good Help

Let us pray and hope that their new sanctuary will be designed by Duncan Stroik or someone of equal stature. The thought of this glorious copy being housed in a typical catholic-church cracker box is the stuff of nightmares. We poor Catholics have been subjected to such bad taste lo these past 50+ years.