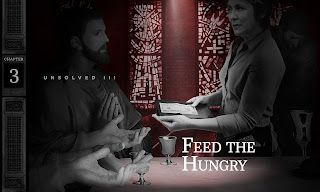 Father Alfred Kunz had a special affinity for mothers, whether living or dead, married or single. With one in particular, he grew especially close.

Kunz met Mora Smith, who had served in the Marines and was raising two boys on her own, in 1997.

She was waiting tables at Brian’s Diner in Waunakee, less than 10 miles from St. Michael in Dane.

Kunz came in most mornings for a breakfast of poached eggs, orange juice and straight black coffee. One morning, Smith told him she liked his hat, which was square with peaks on top. Known as a biretta, such caps were often worn by clergymen before Vatican II.

Although.... one odd bit, at the end of each article JS gives background on the reporting.  I saw this:

In reporting this story, Milwaukee Journal Sentinel reporter Gina Barton conducted dozens of interviews with those involved in the case. She attended the 20th anniversary Requiem Mass for Father Alfred Kunz and visited the Queen of the Holy Rosary Mediatrix of Peace shrine in Necedah, Wis.
...
Barton read court records, archival records detailing events at the shrine and portions of Malachi Martin’s book on exorcism, “Hostage to the Devil.”

Was Fr. Aflred Kunz in some way mixed up with the fake Necedah Shrine crazies??  If you remember back in 2011 one of them was charged with attempted murder.  The interdict was put in place in 1955, and repeated again in 1975, the murder was committed in 1998.  Kunz must have known how extremely fake the apparitions were, right?