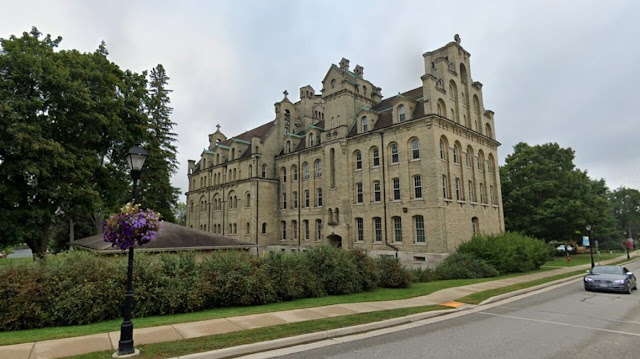 A historic Elm Grove church and convent is being sold to a local development firm that plans to convert much of that space to apartments.

Mandel Group Inc. has agreed to buy the School Sisters of Notre Dame complex, it was announced Monday. The 30-acre property is at 13105 Watertown Plank Road.

Mandel has done some preliminary work on plans to redevelop the site, but hasn't yet determined how many apartments could be built there, said Dan Romnek, a development associate at the firm.

If the chapel is going to be preserved, then under the circumstances this was the best case scenerio that could have been hoped for. (the Sisters of Saint Francis had no qualms about razzing their beautiful 1890s chapel a few months ago.)

BTW Matt have you heard anything about this ? https://www.facebook.com/HistoricStMarysPewaukee/?__tn__=%2Cd%2CP-R&eid=ARAddpq1JoICULuDkJmFEgQB08MPefWe3Lc7JC_Ix9WPHvcQQ6hqjLLIN8EcXPQHWY4O2PZZTCNiwzbf

Wisconsin has these beautiful stone and brick gothic churches from the 1800s and it sometimes feels like people within the church are running a scorched earth campaign against them.

Yes and hopefully such decesions maybe will include a realization that 19th century stone churches on main streets and scenic hills that seat 200 or 300 are not just a beautiful part of our history but will also be more practical for the Catholic population a generation hence than large mega parishes that accompanied urban sprawl that seat 1000s but then see only a dozen baptisms a year.

This is especially sad news for me. I had a great-aunt who was SSND. Many visits to that beautiful convent...