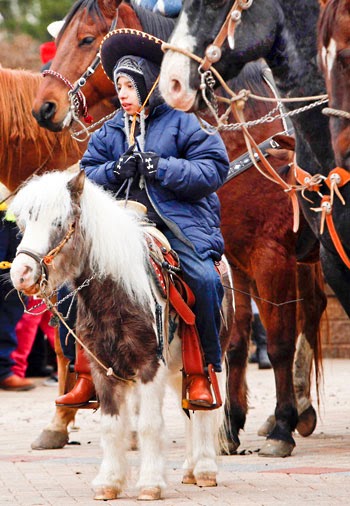 CHICAGO — In a tradition that hails from Mexico, more than 250 people rode their horses on a pilgrimage to the Shrine of Our Lady of Guadalupe in Des Plaines Dec. 7 to pay homage to Mary.

The pilgrimage was held in advance of the feast of Our Lady of Guadalupe, which is Dec. 12.

The group, mainly comprised of men, began their journey in the morning on forest preserve trails in Lincolnshire. It took four hours to arrive at the shrine. Once they arrived, riders were greeted with crowds and bands. As they passed by the outdoor shrine, many removed their hats, and all placed a rose in a basket for Mary.

In Mexico City, it’s a tradition for groups or clubs to make a pilgrimage to the Guadalupe shrine there on the feast day, which commemorates Mary’s appearance to St. Juan Diego on Tepeyac Hill near modern-day Mexico City.

Mary appeared to Juan Diego for the first time at dawn Dec. 9, 1531, and said she wanted a church built in her honor on that hill. He went to the bishop< to share this news, but was put off by the prelate. She appeared again, and Juan Diego — who was called by name by the lady in the apparition — again approached the bishop. The bishop asked for a sign from her and Mary produced enough roses in December to fill Juan Diego’s cloak, or tilma.

continue at The Compass
Posted by Badger Catholic at December 11, 2014

Email ThisBlogThis!Share to TwitterShare to FacebookShare to Pinterest
Labels: Shrine of Our Lady of Guadalupe - Des Plaines, Traditional Catholicism

I wonder, has this Shrine in the Chicago area had a negative impact at attendance at the Shrine in
La Crosse?

I doubt it. I grew up in Stoughton and never heard of the shrine in La Crosse. I didn't hear about the one in Des Plaines (Chicago) until I moved down here for college in '06. There is a huge Hispanic/Latino population in Chicago and most of the folks who go to Des Plaines live within Chicagoland. Also - I don't think the Shrine in La Crosse is well known at all in Chicago.

The Pilgrimage to the Maryville Shrine in Des Plaines is 27 years old and nets around or just under 100,000 for the Feast Day.