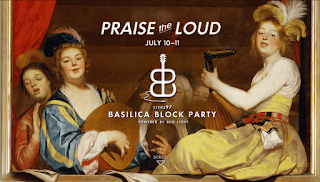 
For its 21st year, the Basilica Block Party has landed one of its most diverse and strongest lineups – and one that seems less curated by longtime sponsors Cities 97 radio than ever.

Friday: Weezer, Basilica’s headliner in 2010, is back with its nerdy, catchy modern-rock including “Pork and Beans” and “Beverly Hills.” Nate Ruess, the fun. frontman who has gone solo after one smash group album, will showcase the lush romantic pop heard on his 2015 solo debut, “Grand Romantic.” Cities 97 and Basilica mainstays O.A.R. and Mat Kearney return this year. Also appearing are Matthew Sweet, known for the 1991 power-pop classic “Girlfriend,” and Motion City Soundtrack, the Twin Cities power punks who fit in at many a festival.

... Interestingly, the basilica organist did a few organ covers of the songs on their Youtube page. Well... at least it's not during the liturgy?  Yikes.  Although, it's not like the organ can just be lifted up and put in another room to be used.


Honestly I'd be more likely to be seen at the Basilica Block Party than at Lifest.  I know!  I'm a dirty, rotten pagan.  But at least there's no "Rock Mass" involved.

It has in the past been called the "Lavender Basilica," btw.  All the more interesting as they are hosting Cardinal Burke's TLM in September.
Posted by Badger Catholic at July 09, 2015

To me it looks as if they DID just pick up the organ and move it - it is sitting in the sactuary!

The women from the the Labyrinth Prayer Group always take part in the wet alb contest - it's pretty cool.