MM: First They Came for the Confederates... 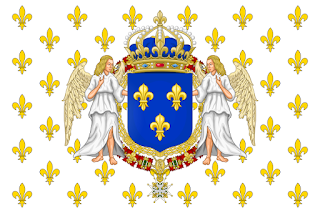 As (perhaps surprisingly) most readers of The Mad Monarchist hail from the United States, I am sure everyone knows about the recent campaign to purge all symbols of the former Confederacy on the grounds that these are symbols of hatred, racism and division. It started with the Confederate battle flag flying over a monument to Confederate soldiers in Columbia, South Carolina and very quickly expanded to banning the rebel banner from public view entirely. The campaign gained such momentum that the bodies of a dead Confederate general and his wife are now set to be dug up in Memphis and the 70's TV show "The Dukes of Hazzard" has been banished from the airwaves as the main characters drive a car with the offensive flag on the roof. What (I am sure someone is already asking) does any of this have to do with monarchy? Well, the symbol of one of the most prominent monarchies in the world may be next. It is a symbol prominently featured on flags across the United States and a symbol long identified with a kingdom near and dear to the hearts of many monarchists; the traditional Kingdom of France. Yes, I refer to the fleur-de-lis of the Bourbon monarchy.

On Thursday, at a New Orleans City Council meeting, the leader of the activist group "Remove Racist Images", one Rudy Mills, said that the fleur-de-lis is the next offensive symbol that should be removed from view. After applauding the removal of the Confederate ensign, Mr Mills said that the fleur-de-lis should go as well. "Check the history. It's also a very racist symbol" he said. Last month, this same man held a rally to demand the removal of this and any other symbol from New Orleans deemed to be offensive saying, "The rally is to start a movement to remove all the racist images that surround our city." At the same City Council meeting, New Orleans Mayor Mitch Landrieu (Democrat, son of a former mayor, brother of a former senator) said that, "New Orleans is a place where the original vision of America rings authentic and true, that all men are created equal. However, make no mistake, these statues and symbols that reflect the opposite of our shared American values have no place where they are today."

In fact, let's dig up Queen Marie Antoinette and guillotine her again.

Interesting side note; did you know that because of the aid that King Louis XVI gave to the American Revolution, that there was an effort to give the royal family political asylum in Louisiana?  Alas, anti-Catholic sentiments prevailed.
Posted by Badger Catholic at July 14, 2015