StarTribune: In his first remarks since resigning, Nienstedt denies allegations in affidavits 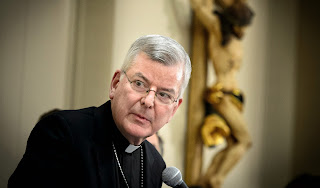 Former Archbishop John Nienstedt said he remains “dumbfounded” by the allegations of personal misconduct that emerged last year during an internal church investigation of his behavior — a report that the archdiocese now is considering making public.

The archdiocese declined to answer questions about the investigation [into Nienstedt's conduct]. Last year, it hired the Greene Espel law firm in Minneapolis to look into allegations of clergy misconduct involving Nienstedt and adults. The law firm’s work ended last summer, and the chancery hired Minneapolis criminal defense attorney Peter Wold to complete the probe.

Greene Espel has publicly disputed claims by the archdiocese that Nienstedt did not intervene in the investigation.

Another affidavit from a Michigan priest said that Nienstedt pulled up to his car in an area frequented by gay men one December in the early 1980s and asked him if he had any “poppers,” an inhalant used by gay men to enhance sexual pleasure. When he got into Nienstedt’s car, and Nienstedt recognized him as a former student, he changed the subject, the priest told the Star Tribune.

Nienstedt denied all the allegations, point by point and in general. He also stressed that none of the people who filed affidavits claimed that he “ever abused any minor, had a sexual relationship with any individual, or committed any crime.”

The former archbishop insisted he never set foot in a gay nightclub or visited gay cruising spots. He said he was not even in Detroit in December 1982, when the Michigan priest claims he asked for the “poppers.” He was assigned to the Vatican Secretariat of State in Rome and was not allowed to come home for the holidays.

Obviously the claims sound fake.  If they are fake and if Neinstedt is eventually exonerated, the process will have served its purpose; to signal to any prelate that they will be falsely accused if they attempt to take any action against the homosexualist agenda outside or even inside the Church.  If they are true, it will be one of the most bizarre chapters in US Church history and would hopefully signal a new chapter in curia management with more checks and balances.
Posted by Badger Catholic at July 20, 2015