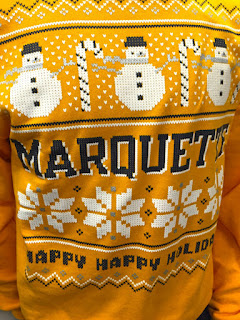 Then, all of a sudden, announcements from Marquette of the event suddenly began to include the word “Christmas.”

There was an e-mail, dated Monday at 3:17 p.m. that announced the “Annual Christmas Tree lighting ceremony.”

Somebody forgot to sanitize the University calendar, however, since today the entry still omits “Christmas” just as it did on Sunday.

McAdams notes the commenter on our post yesterday received the later version of the Christmas Tree message, not the former.  Again, I'm not sure it was policy, just another indicator of the toxic culture at Wisconsin's preeminent Catholic university.