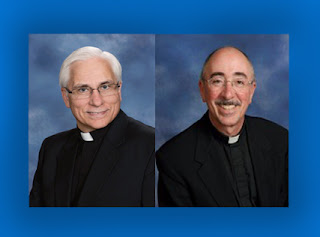 Milwaukee native Fr. Jeffrey R. Haines and Burlington native Fr. James T. Schuerman have been appointed by Pope Francis as Auxiliary Bishops for the Archdiocese of Milwaukee. The appointments were announced in Rome, January 25, and the two priests will be ordained bishops by Milwaukee Archbishop Jerome E. Listecki at the Cathedral of St. John the Evangelist. The ordination date has not been announced, but should be within the next five-to-eight weeks.

By the way folks, very nice looking redesign on the ArchMil website.

The Archdiocese has been without a full time auxiliary since the departure of Bp. Hying over two years ago.

I don't have any info but I'll let others chime in.

I suspect there is if the goal is the pressure an archbishop into submission to the Gang of Nine.

The diocese requested two bishops when Hying was transferred.

The archdiocese used to have two active auxiliaries. It seemed very strange that there wasn't at least one appointed, so this would make sense as they are in fact overdue.

Gang of 9? Is that the Council of 9 Cardinals?What would they be pressuring Listecki to do?

I'm being tongue in cheek there Anon, only saying Listecki is likely a JPII minded bishop when it comes to interpretation of marriage and communion, contra certain popular Amoris bishops in the news lately.

Sadly, in this age and given these circumstances, those worries/thoughts are not unreasonable. Sadly, the benefit of the doubt does not lie with Pope Francis right now. +Haines is in the confessional on a regular basis, so I consider that a positive sign.

He had a good start at St. Anthony's.

Haines need to be in the confession often, given the grave scandal he presided over in West Bend!

Don't know about that, I just know he hears a lot of confessions at cathedral and for that I'm grateful