A brief recap; this all started with The Dubia being issued asking for clarification on Amoris Laetitia, privately first and then publicly.  Immediately after the publication the Vatican ordered an investigation into the Order of Malta, in an apparent attempt to discredit Burke seen as the leader of the Pope John Paul II faction in the hierarchy.  Now seen as not enough, and maybe some worry that the hierarchy would cling to the teachings of JPII's Familiaris Consortio, an aggressive campaign has started to paint Cardinal Burke as literally some kind of neo-nazi in the WaPo and NYTimes, and the Cardinal (I literally laughed out loud) put up anti-Francis posters around the Vatican.  No evidence is given.  Even the local La Crosse paper got in on the libel (and then complains when he wont give them an interview).  The charges stem because of an alleged meeting he had with a reporter in Rome:

Breitbart: In hiring Breitbart’s Rome bureau chief, Bannon chose not a Pope-basher or an anti-Catholic, but Dr. Thomas Williams, a theologian and former Catholic priest who has since written literally hundreds of articles on Pope Francis and the Vatican, nearly all of which have been sympathetic to the Pope.

From the liberal side though, this campaign against Burke is seen as an imminent opportunity to change the Church's teaching on sexuality.  There are those in the Church will be happy to cooperate as they despise Burke for a number of reasons, and apparently have the support of Francis whom seems to troll him regularly in public comments without mentioning him by name.  And most though are happy to hide out somewhere until the whole thing blows over.

Whatever side you are on, pray for your enemies and persecutors.  Do good with the time you have.  Seek the cross.

As I posted last week, there is an attempt to find something to accuse Cardinal Burke with.  There's a hope that Burke had disobeyed the pope in some matter.  He has sort of been but not really removed from Malta.  Hefty charges being laid: Report: Pope told Knights of Malta chief to implicate Cardinal Burke in his resignation letter

Phil Lawler: Blame the messenger: in this case Cardinal Burke


Let me offer an answer to my own question. The three-pronged conspiracy theory is being promoted by the Pope’s most ardent defenders. (If you doubt me, sign up for the Twitter feed of Father Antonio Spadaro, and notice how often he makes or encourages cheap shots at Cardinal Burke.) From there it is picked up by secular journalists, who do not understand the Catholic controversy and are much more comfortable framing issues in political terms. The goal of the conspiracy theorists is to discredit Cardinal Burke—in this case exploiting the negative image of Bannon and using guilt-by-association to transfer that image onto the cardinal. And why discredit Cardinal Burke? Because Pope Francis cannot and/or will not answer his questions.

LifeSite: The aristocracy may not like him, but the simple faithful just love Cardinal Burke 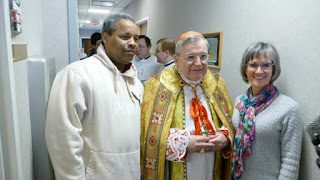 Cardinal Burke’s visit to the clinic came during one of his U.S. trips for various commitments, including the celebration of a Pontifical Low Mass in the Extraordinary Form at the adjacent Saint Mary-Saint Anthony Church.

Leavenworth resident Bingo Dickerson drives 60-plus miles once a month for diabetes education at the clinic and just happened to have an appointment while Cardinal Burke was there to bless the procedure table from the Knights.

Dickerson, a Baptist, asked one of the priests accompanying Cardinal Burke if he could meet him. It didn’t matter to Dickerson that he isn’t Catholic.

StAR: The Gentle Lion of Wisconsin– An Appreciation of Cardinal Burke 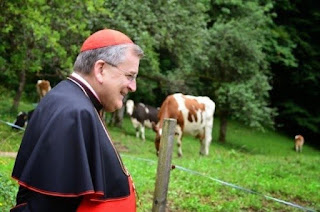 Raymond Leo Cardinal Burke actually embodies Chesterton’s description of a patriot – someone who loves his country – or his Church, so much that he is a “discontented man.” The opposite, Chesterton said, is a “courtier,” an “upholder of present conditions.” Just like in the time of St. John Fisher, it might appear that the courtiers have the upper hand, but who remembers the names of the bishops who trembled with fear in their palaces, while Fisher stood alone? Although Wisconsin is known for its production of cheese and not yet for lions or martyrs, maybe, when the smoke of battle has cleared, people will say – “there was only one Cardinal Burke – the Lion of Wisconsin.”

That last line gives me chills. Sure is no lack of people and things to pray for and about.

Double crossing, corruption, and lying coming from the Vatican. Restore the contraceptive giving man and appoint the brother to the Vatican bank. Right. Yes, they are looking HARD for a way to discredit C. Burke, that holy man. Holiness is not appreciated--may I even say hated--in the Vatican these days. Abortionists, communists, organ harvesters, population control folks, rich people, Hollywood ones, liberation theologists, homosexual couple---they are welcome but not urged to change their hearts. Faithful Catholics? Pick from the numerous names they have been called. This is an evil time in the Church.

May God bless and strengthen and console and protect Cardinal Burke.