Marquette Provost Throws His Campus Under the Racism Bus, Provost refuses to meet with group he sabotaged 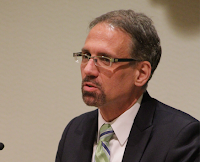 Last week, the Young Americans for Freedom at Marquette held a wildly successful talk featuring Ben Shapiro. Two lecture halls were filled beyond capacity, even as Marquette staff attempted to sabotage the event behind the scenes.

The first time any Marquette administrator publicly addressed students about the Shapiro talk was in an editorial in the campus newspaper on February 14. Provost Dan Myers—who once carried a sign that labeled conservatives as homophobic, transphobic & biphobic—penned an op-ed pleading for “critical thinking” when considering conservative speakers like Shapiro.

And let's not pretend the Marquette administration has any interest in engaging in the arena of ideas.


Update: YAF-Marquette chairman and adviser reached out to Provost Myers for a meeting. Through his chief of staff, Myers denied the request because he was too busy. Myers’ office said they could direct the YAF chapter to another person on campus. At this point, Myers is unwilling to defend his actions directly to conservative students. [Seems like Dan had plenty of time to sabotage the event in the first place though]


What does it say that, on the Marquette campus, it is usually conservatives who arrange debates, but the Marquette administration arranges only one-sided programs? It must mean that, deep down, the people running Marquette sense that they would be at a disadvantage in an open, balanced debate.

If they were confident of their views, they would welcome having those views be shown to be superior in head-to-head competition.

continue at Marquette Warrior
Posted by Badger Catholic at February 17, 2017