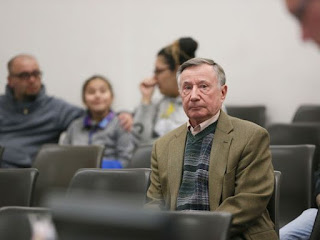 Four years after he was removed from ministry because of allegations of inappropriate contact with children, a Milwaukee priest has been charged with three counts of felony sexual assault of a child beginning when she was 6 years old.

The Rev. Robert R. Marsicek, 75, who had been the subject of numerous complaints from parents over the years and avoided a criminal charge in 2013, was charged Wednesday. Appearing in Milwaukee County Circuit Court on Thursday, Marsicek said he was worried about the victim.

He was released on a $50,000 personal recognizance bond and was ordered to have no contact with the victim or anyone under the age of 18.

According to a criminal complaint, Marsicek repeatedly touched the child while at Pius X Parish and school in Wauwatosa between 2007 and 2010. Among the incidents, she said Marsicek at one point laid on her and touched her breasts and at another reached under her jumper to "pat" her vagina.

So is Annysa doing stories on the Church again?  Last I heard she was on education.  She turned the campaign into another attempt to bleed the archdiocese of money.  Like I've said numerous times, I'm all for reasonable settlements.  But ultimately felony criminal charges are what really matters here, not another SNAP pay for play scam.  Justice demands crimes do not go unpunished.  Ultimately this is a crime perpetrated by an individual.  The individual gets a fair trial whether they deserve it or not.  But invoking SNAP attack for cash causes the most important point at the end of the article to be missed.


Marsicek had a history of questionable contact with children during his 12 years at St. Pius X and had been counseled repeatedly by the archdiocese and the Salvatorians to stop touching them, according to documents obtained by police in 2013.  [NOT and appropriate response!]

Two Milwaukee archbishops had been made aware of complaints over the years, Archbishop Jerome Listecki in 2012 and then-Archbishop Timothy Dolan, now cardinal of New York, in 2005. When the 2013 allegations emerged, both the Milwaukee archdiocese and Salvatorians had known since May 2012 that Marsicek was under investigation in Sacramento, Calif., on allegations of sexual abuse of a minor in the 1980s to '90s. But they allowed him to remain in ministry for 10 months while those claims were investigated. At the time, Topczewski dismissed Marsicek's incidents with children as "boundary issues."

Listecki suggested in a letter to local Catholics in 2013 that the church may have erred by not removing Marsicek earlier.

Hindsight is always 20/20 but if the archdiocese has to tell a priest "stop touching children" there's no justifiable way that he can be left in ministry.  And if the archdiocese was already aware of the criminal allegations in his past, I don't care if he's not diocesan, he's getting the boot immediately and every Salvatorian serving in the archdiocesan borders is put on notice as the Salvatorian leadership is at the very minimum partly culpable.  This is the fundamental problem with the Dallas Charter and what Phil Lawler describe here: Catholic bishops 'don't get it'—the fundamental problem is a corrupt clerical culture.  It's no time to play Church politics.  It's time to strap on the army boots and kick some ass and let us know the archdiocese is as pissed off as the rest of us to hear about this shit going on regardless of what the damn lawyers are saying.

Here's a report from that time, which quotes Mr. Lawler at some length,
http://www.ewtn.com/v/experts/showmessage.asp?number=309411

It appears to also be the occasion when Bishop Bruskewitz called the USCCB "this hapless bench of bishops".

So they were, so they remain, and so far there's no indication that their successors appointed since, including by Pope Francis, will be any different overall.

It shows, for Milwaukee it is business as usual. Could we expect anything else from the Weakland crowd that still runs the diocese?