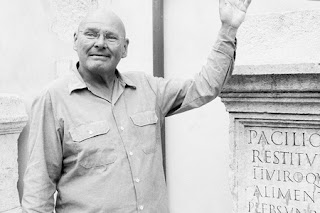 In 1970, the Procurator General of the Discalced Carmelite Order, Finian Monahan, was summoned to the Vatican for a meeting. The subject of the meeting was a promising young American priest by the name of Reginald Foster. The head Latinist of the Vatican’s State Department had tapped Foster to write papal correspondence, which was at the time composed entirely in Latin. Foster wanted the job but was bound by a vow of obedience, and the decision would be made by his superiors. Monahan intended to resist. Foster, thirty years of age, had proven himself to be both supremely intellectually gifted and utterly reliable—a precious thing at a time when the Catholic Church’s religious orders were hemorrhaging priests. Monahan thought Latin was a dead end. He didn’t want to lose one of his best to a Vatican department that would only get less and less important every year. He said Foster would go to the Vatican “over my dead body.”

continue at The New Criterion

A fantastic article.  Yeah, if the man still believes Catholicism is true is not clear, but there is no doubt in his influence in the resurgence of the Latin language.