An organ recital will be performed at the Cathedral of Saint Joseph the Workman in La Crosse on Saturday, April 28, 2018 at 7:00 pm.

The performer is Donald VerKuilen, who is Director of Music and Musical Arts at The Old Stone Church in Cleveland, Ohio. He was a student of James David Christie at Oberlin. The program will be about one hour in duration. Admission is free; a freewill offering will be accepted. He will play works by Langlais, Couperin, Franck, Sløgedal, Tournemire, Widor, Karg-Elert, and Craig Phillips. We hope you will be able to attend! 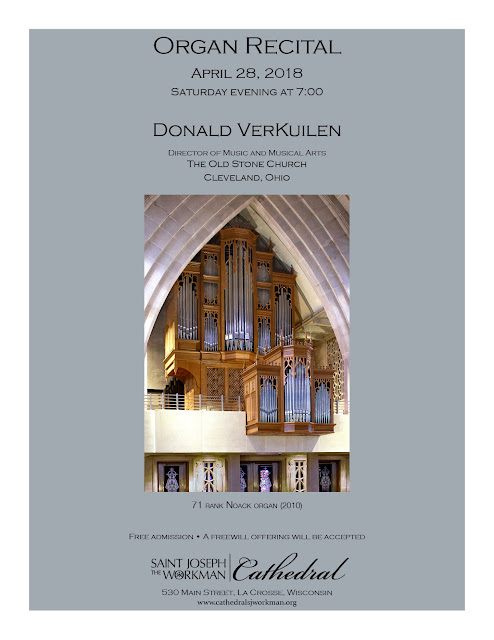 Don VerKuilen has earned a national reputation as an organist, church musician, and composer. Mr. VerKuilen currently serves as Director of Music and Musical Arts at The Old Stone Church of Cleveland Ohio. Right at the center of Downtown Cleveland, Mr. VerKuilen hails over the organ at The Old Stone Church and directs its professional choir. Most recently, The Old Stone Church’s Choir performed Paul Carr’s “Seven Last Words from the Cross,” the piece’s second time it has ever been performed in the United States, earning an invitation to perform at Carnegie Hall in 2019. Winner of the 2016 American Guild of Organists New Music Competition, his works have been published and featured on National Public Radio’s Pipedreams radio show.

A native of Appleton Wisconsin, Mr. VerKuilen’s organ studies started with Frank Rippl, Organist and Choirmaster Emeritus at All Saints Episcopal Church through a scholarship from First English Lutheran Church. Mr. VerKuilen continued his studies at the Oberlin Conservatory, studying with James David Christie and Jonathan Moyer. Mr. VerKuilen studied performance and improvisation with Marie-Louise Langlais, former professor at the Conservatoire de Paris and widow of the famed performer and composer, Jean Langlais. Mr. VerKuilen has performed with various orchestras and ensembles around the country including a performance of “Pièce en Forme Libre” by Jean Langlais with the Oberlin Orchestra, a rarely performed work. Mr. VerKuilen has performed as a solo recitalist across the United States and Europe including venues such as Overture Hall in Madison Wisconsin, the Basilica di San Giuseppe in Rome Italy, as well as Organ Historical Society Conventions. Outside of his performance career, Mr. VerKuilen is an accomplished organ builder, owning the VerKuilen Organ Company LLC.