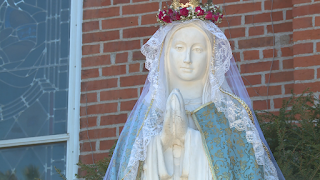 Members of St. Mary's Catholic Church in Wausau are celebrating the return of their Virgin Mary statue.

The statue was stolen last weekend, but police were soon able to find the suspects, who had taken it to a property in Pelican Lake. Since Tuesday, the statue has been back in its original place outside in the church gardens.

Sunday's ceremony celebrating the religious symbol was a contrast to how many church members felt after discovering the statue was taken by thieves.

"I think I was part of a generally shocked congregation, that she had gone," St. Mary's Church member Johanna Delp said. "This is St. Mary's Oratory, so she is our matriarch, our monarch. And we honor her and revere her."

But it didn't take very long before that shock quickly turned into faith and hope. They're what Father Aaron Huberfeld believes helped lead to the statue's safe return.

"The thought in the back of my head right away was 'She'll be coming back by the end of the week,'" Father Huberfeld explained. "We knew that those prayers would bring her back."

Also a happy birthday to Canon Huberfeld (May 13)!  Apparently his present was "re-gifted" this year.