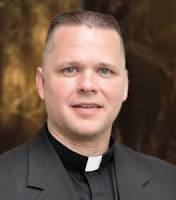 (Champion, Wis.) – Considered one of the most captivating and inspiring messengers of the Divine Mercy message, Father Chris Alar will be the featured speaker for the Marion Retreat Day on June 30 at the National Shrine of Our Lady of Good Help.

Father Alar, director of the Association of Marian Helpers, will give a two-part talk on “Mary and Divine Mercy: What We Learned at Fatima.” Part one of Fr. Alar’s discussion begins at 9:30 a.m. and part two begins at 1 p.m. There will be a group rosary at 10:30 a.m. followed by Mass at 11 a.m.

Fr. Alar’s road to become a Priest was unusual. Following high school, he was appointed to the United States Air Force Academy where he trained to be a fighter pilot. After receiving a medical discharge, he earned a degree in engineering, then his MBS from the University of Michigan and became a business owner. He then received God’s calling to serve, earned his Master of Divinity degree and now speaks about Divine Mercy around the world.

Email ThisBlogThis!Share to TwitterShare to FacebookShare to Pinterest
Labels: Shrine of Our Lady of Good Help