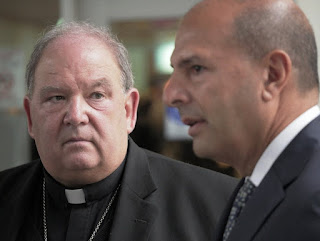 Archbishop Bernard Hebda says he is troubled by the Vatican's failure to conclude an investigation into allegations that former Archbishop John Nienstedt behaved inappropriately with young men.

In a post on the archdiocese website, Hebda said that investigative materials were submitted to the Vatican in 2014, but the Vatican apparently halted any investigation of its own when Nienstedt resigned in 2015.

"Thus, the matter remains unresolved for the accusers, for Archbishop Nienstedt and for the public," Hebda wrote. "I share the frustration that is felt by them, and believe this situation highlights the need for a better-defined process and independent mechanism to resolve allegations made against bishops."

Hebda noted that there were later allegations that Nienstedt acted inappropriately with some boys in Germany in 2005, when Nienstedt was a bishop in New Ulm, Minn.

Hebda said that until the allegations are resolved, the former archbishop is prohibited from celebrating mass in the Twin Cities archdiocese. Hebda said he is not suggesting Nienstedt is guilty but "my hope is that this decision prompts further action by those with authority over Archbishop Nienstedt to resolve this question.

I suspect this is related to the fact that Abp Nienstedt publicly participated in Bishop Morlino funeral last week.

Yeah, I was surprised to see him there.

Archbishop Nienstedt and Bishop Morlino were colleagues at Sacred Heart Major Seminary in Detroit. It's no surprise that Minnesota Public Radio would be pursuing this with all the vigor of a bloodthirsty shark though. It's also a tragedy that the Vatican is still so clueless when it comes to dealing with this crisis. :(