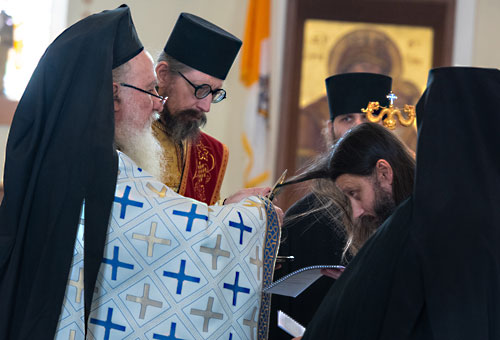 NAZIANZ — A Divine Liturgy brought together four jurisdictions of Greek-Catholic communities, as well as the local Roman Catholic community, on Feb. 16 at St. Gregory Church. The liturgy celebrated the life tonsure of Fr. Paiisi into the monastic brotherhood of Holy Resurrection Monastery.

Catholics worldwide number around 1 billion, with the vast majority belonging to the Roman Catholic Church. About 20 million belong to the 21 Eastern Catholic Churches. The largest of these are churches of the Byzantine tradition, to which the monks at Holy Resurrection belong.

Fr. Paiisi, whose birth name is Patrick Firman, is a member of the Ukrainian Greek Catholic Church. In honor of his faith background, Bishop Benedict Aleksiychuk, eparch of St. Nicholas Ukrainian Catholic Eparchy in Chicago, joined Abbot Nicholas Zachariadis, leader of the Holy Resurrection monastic community, for the tonsure ceremony, which is equivalent to a solemn profession in the Roman Catholic Church.

Oh how I wish it were a little closer.  I hope I can visit soon.