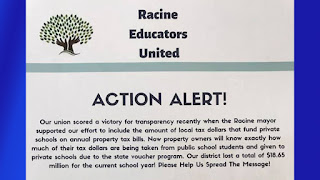 This is pretty outlandish.


MADISON, Wis. — Racine Mayor Cory Mason and city officials coordinated with the school district and the local teachers union on what critics say is a misinformation campaign about the Racine Parental Choice Program, according to internal emails obtained by the MacIver Institute.

The communications expose how integrally involved in the campaign Racine Educators United was, calling meetings with city officials and calling some of the shots on the information literature.

A Racine Unified School District official, when told of the communications, said she was “unaware of the intricacies of the back and forth” communications involved.

In its latest round of property tax bills to homeowners, the city of Racine included an insert claiming that one-fifth of Racine’s property tax levy goes to private voucher schools in the school district. The point of the insert: Let Racine property taxpayers know just how much money the school choice program is siphoning from the public education system.

Except, the accusation is spurious.

The message is, at best, misleading, dismissing some important facts, as Ola Lisowski reported in a MacIver Institute analysis on Tuesday. In fact, the actual property tax levy for parental choice private schools is 5 percent, when calculating the millions of dollars more the district receives in general school aids — thanks to the school choice program. By law, the state must hold traditional public schools harmless from the financial impacts of students leaving their systems and moving into choice schools.

Also:  The City of Racine Lied About School Choice
Posted by Badger Catholic at April 11, 2019