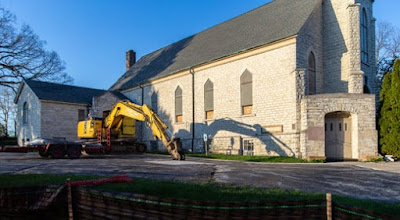 The village of Pewaukee filed a lawsuit and temporary restraining order May 8 to block Queen of Apostles Congregation from demolishing St. Mary's Church.

St. Mary's Church, 449 W. Wisconsin Ave., is owned by Queen of Apostles and was built in 1858. In late April, the church was designated a historic landmark by the village of Pewaukee Historic Preservation Commission.

Under the village's municipal code, Queen of Apostles cannot be granted a permit to demolish the church without the written approval of the village board. The complaint also noted that Queen of Apostles had not filed a petition under the historic preservation ordinance for demolition.

I'll try to find some time to follow this closer.
From a reader:

Everything is quickly coming to a tipping point with the legal dispute between the parish and the local government, the court date tomorrow and the demolition equipment already in position around Saint Mary's.

It is frustrating in the sense that we are so rapidly seeing parishes close these beautiful historic buildings because they are too small or "obsolete" or whatever when it looks like the newer megachurch style parishes which came in with urban sprawl to replace the old parishes only see a handful of baptisms and weddings a year and their massive seating capacities wont really be needed in year 2030 or 2040 and we will probably wish that we had kept more of those picture perfect 19th century gothic type parishes.

Update on the court hearing, there is a temporary reprieve, another hearing will be held on June 8.
Feast of the Sacred Heart

Not (really) related.......drove through Eagle the other day and saw a "FOR SALE" sign on the property which only 90 days ago had a sign "Future Site of St. Therese Parish Church."