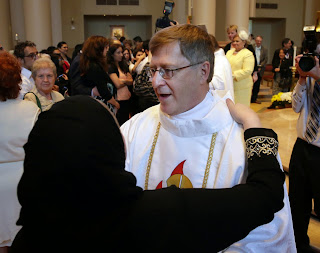 Like most seminarians, the Rev. Dennis Saran could tick off the many influences that bolstered and shaped him in his yearslong path to the priesthood.

There was his Catholic upbringing, of course. His teacher-priests and fellow seminarians. Long-dead theologians whose writings and ruminations have spoken to him through the ages.

But Saran includes among them three influences few seminarians can claim: his adult daughters, two of whom have charted a notably different path.

They are converts to Islam.

"They actually helped me in my journey," said Saran, whose letters to and from the two daughters during their college years in Madison often explored religious themes.

It gets a bit "extra ecclesias salus" but an interesting situation.
Posted by Badger Catholic at May 21, 2015

Email ThisBlogThis!Share to TwitterShare to FacebookShare to Pinterest
Labels: Archdiocese of Milwaukee