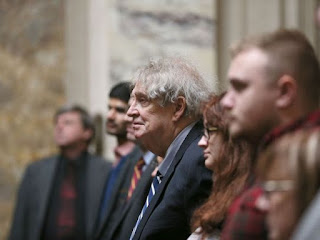 The Wisconsin Supreme Court ruled Friday that embattled Marquette University political science professor John McAdams was improperly suspended after he publicly criticized a graduate student by name on his politically conservative blog, leading to threats against her.

The court ordered the Jesuit university to immediately reinstate the professor and sent the case back to a Milwaukee County Circuit Court judge to award damages, including back pay.

McAdams has been suspended without pay for the past seven semesters.

"The undisputed facts show that the University breached its contract with Dr. McAdams when it suspended him for engaging in activity protected by the contract's guarantee of academic freedom," said the opinion written by Justice Daniel Kelly.

We all owe McAdams a debt of gratitude.  Had he not been willing to suffer through this whole thing, anyone not compliant with the latest liberal hysteria would have to continually suffer through another incoherent round of career punishment and virtue signaling.

I think Lovell deep down probably knew Marquette would lose the case, but at least he showed he's willing to punish the politically incorrect.  Will it change a rotten culture at Marquette?  Unlikely, but it can't hurt.  Hopefully this decision will help protect other professors whom are attacked for their political or religious beliefs.

Margot Cleveland analyzed the supreme court's majority and dissenting opinions in this post at The Federalist.

Marie Rohde reported on the court's decision for the National Catholic Reporter.