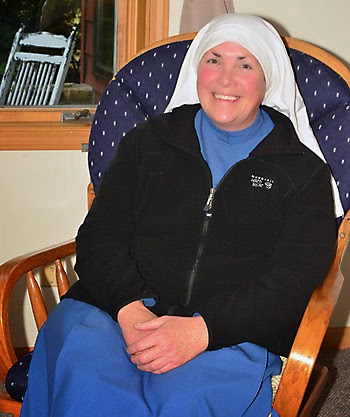 BAILEYS HARBOR — Mother Mary Catherine is on the cusp of an adventure — a good place to be, she says, because it means resting totally in God’s hands.

For her, it’s a familiar situation. Although she and two novices are now part of a fledgling religious order, the Missionaries of the Word, Mother Mary Catherine was once a member of Blessed Mother Teresa’s Missionaries of Charity.

After 10 years of formation, during which time she worked closely and personally with the saintly missionary, she was refused admission to final vows because of health issues.

The order’s decision, coming a month after the death of Blessed Teresa, stunned the former Peggy Duemling.

“I had always had asthma, but it was never mentioned as a problem until then,” she said.

In 1998 she packed her bags, came home to Wisconsin, went back to school, and although she was a little confused, she was content to wait and see what God had in mind.

Great article, worth a read.  Not to be selfish but I'm glad she came back, we want all the women religious here in Wisconsin, especially those of the caliber of Mother Mary Catherine!
Posted by Badger Catholic at February 13, 2015

We prayed our family Rosary just last night for healthy marriages and for reparation for any negative fruit that the "50 Shades" movie might bear, using the Rosary that Sr. Mary Katherine gave me for my anniversary (my wife has a matching one)! God bless her and the MissionariesI