Minn Public Radio: An isolated Nienstedt tried to limit investigation into himself 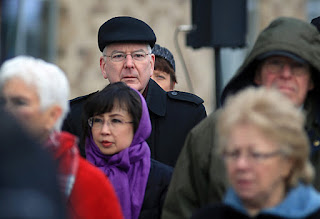 On April 10, 2014 — seven months into the clergy sex abuse scandal — Archbishop John Nienstedt's top advisers gathered for a private meeting. They had just received several affidavits from an internal investigation of Nienstedt that had been authorized by the archbishop himself to address damaging rumors.

The sworn statements accused Nienstedt of inappropriate behavior, according to people who read them, including sexual advances toward at least two priests.

Private investigators had even arranged a prison interview with Curtis Wehmeyer, the former priest at the center of the clergy sex abuse scandal. Wehmeyer, who pleaded guilty in 2012 to child sex abuse, told the investigators he couldn't understand why Nienstedt wanted to spend time with him or why he kept him in ministry. Nienstedt made him uncomfortable, he said, and they never had sex. Wehmeyer said he wasn't interested in Nienstedt.

Nienstedt had authorized the investigation with the expectation that it would clear his name. Instead, it threatened to ruin it. At the meeting last spring, the advisers went around the room. Each said Nienstedt should resign.

A few days later, Auxiliary Bishops Lee Piche and Andrew Cozzens traveled to Washington to bring that message to the pope's ambassador to the United States, Archbishop Carlo Maria Vigano, the apostolic nuncio. It was a brave move that threatened the careers of both men. Piche and Cozzens had hoped Vigano would agree that the future of the archdiocese was more important than the reputation of one man.

So when I read this, it would seem that it's just another hit job by MPR.  Let me get this straight, we are taking testimony from Wehmeyer that Nienstedt made advances toward him, just like he was groping students during their Confirmations?  AP is even including the part where Nienstedt was trying to remove homosexual seminarians from Detroit's seminary, but they write it as if Neinstedt is making advances toward them.   This is all recycled "news."  Although, Terry Nelson's pastor said "we may be hearing more embarrassing news in the days ahead."

The only new info that I can see is a secret meeting with Piche, Couzzens and Vigano of which no source is cited (it seems plausible it happened), and that the Greene Espel law firm which conducted the first investigation is saying Neinstedt interfered.  Because some of the pieces of this in the news seem fabricated, it's hard to figure out what's what.  Clearly Nienstedt made major mistakes, there's no excuse for Wehmeyer, and it seems he may have indeed interfered with the investigation.  Prayers for the archdiocese.

MPR will be thrilled when Cardinal Burke is assigned to take over.

I was blown away by the homily I heard this weekend.

Yes, they will be thrilled when Cardinal Burke is assigned to take over :) What has happened to the Church, but not the public school system and Hollywood, is exactly what is instructed in Rules For Radical.

He said, she said. Stupid journalism, hard to believe people take it seriously.

Cdl. RL Burke is perpetually busy with so many duties in the sacristy seeking first the rubrics of God.