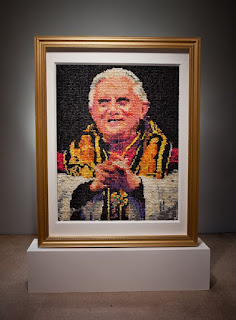 The decision by the Milwaukee Art Museum to acquire and prominently display a controversial portrait of Pope Benedict XVI fashioned from 17,000 colored condoms has created outrage among Catholics and others who see it as profoundly disrespectful, even blasphemous.

Many suggest that if a piece were as offensive to other faith traditions or communities it would not be tolerated, much less embraced.

Milwaukee Archbishop Jerome Listecki blasted the decision as insulting and callous. The museum acknowledged it has fielded about 200 complaints. A handful of patrons dropped their memberships; one longtime docent tendered her resignation; and at least one donor vowed never to support the museum financially again.

Museum officials said an equal number of people have voiced support for the piece and that memberships and pledges in general are growing. They said they regret that the portrait, by Shorewood artist Niki Johnson, has elicited such enmity. But they insist it was not their intent — nor the intent of the artist — to offend Catholics or anyone else. And they said they continue to enjoy the support of people of all faiths, including Catholics.

"This was never intended to be derisive, mocking or disrespectful of the pope," said museum board of trustees president Don Layden. "It was to have a conversation about AIDS and AIDS education. And my hope is when the piece appears in the museum that will be the focus of the discussion."

Jerry Topczewski, chief of staff for Listecki, called that explanation "a smoke screen."

The whole point of this exhibit is to exercise bigotry against the Catholic Church(the largest charitable organization in the world) and Her teachings.  I debated on even covering it since it meets the museum's and the artist's end.  Although condoms cannot prevent the AIDS virus from spreading, the myth is perpetuated that the Church hates AIDS victims.