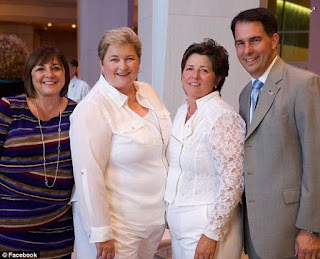 This is Wisconsin governor Scott Walker, pictured at the wedding reception of one of the first gay couples to marry in his state – who told Daily Mail Online today that they do not believe the presidential hopeful is against same-sex marriage.

He smiled with the newlyweds at their reception, which came weeks after a judge struck down an amendment to the state constitution defining marriage as between a man and a woman - a move the governor vowed to overturn.

On June 6, 2014, a federal judge ruled in favor of a lawsuit challenging a 2006 amendment to Wisconsin's constitution, after a public vote, which defined marriage as between one man and one woman.

Among the first to marry were Shelli Marquardt and Cathy Priem who married on June 9 at a civil courthouse ceremony in Waukesha County.

Haven't had time to read through the whole think, but the article is extensive.

If I were on the Scott Walker campaign(wherein I only care about winning the election), I would have intentionally planted this story to improve Walker's "elect-ability."

So anyway. Speaking to a priest friend yesterday he told me that in many parishes in Mpls-StP there is strong support for same sex marriage. I sincerely did not know that and wasn't happy to hear it. he said it is because families have a child who is gay or another relative, neighbor, co-worker or close friend who is, and they are convinced it is a civil right. Likewise - parishoners leave or withhold contributions if the pastor preaches against it.

I was disappointed, to say the least.

I should add he mentioned that so many of the younger priests seem to want to 'go backward' - especially as regard the Extraordinary Mass - he didn't understand that.

Thank God I do. Thank God for the newer younger priests.

I guess I've been living under a rock.

That battle was lost during the Second Vatican Council, but the proximate cause was and remains the Bishops' (and priests') refusal to take on artificial contraception often and hard.

I noticed the white pant suits too. So, if they have not had intercourse with men, I guess they are technically virgins, right? Oh, too many uncomfortable questions arise.