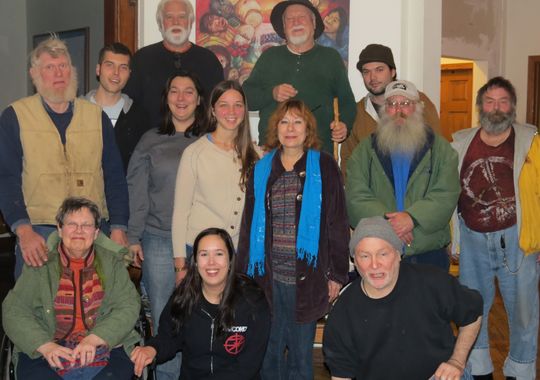 A Des Moines Catholic group has been told it can no longer host Mass after allowing a woman to perform sacramental services in December.

Bishop Richard Pates of the Diocese of Des Moines ordered the Catholic Worker House to cease holding services in a letter dated May 5. An article explaining the ruling appeared in the August issue of "The Catholic Mirror," the diocese's monthly newspaper.

"This matter has been reviewed by the Presbyteral Council of the Diocese of Des Moines," the letter reads. "Members expressed great offense at this action of a rite that is so precious to them and others."

The council of priests voted unanimously to strip the Des Moines Catholic Worker House of its authority to hold Mass "for the time.”

The article's author seems to either not understand the details of this story or to simply be advocating for her own personal opinion.


On the subject of women's ordination in the Catholic church.

In the centuries immediately following Christ’s time on Earth, women had been powerful, according to a shelf full of scholarship written about female priests and bishops during the early Christian church. History books show a striking mosaic from about AD 820, showing Theodora, the female bishop of the Basilica of St. Praxedes in Rome at the time. A third- or fourth-century Christian female priest’s grave was found on the island of Thera. Evidence of women’s presence and leadership in the early Christian church is sprinkled throughout the Bible: There’s Priscilla, who was entrusted with converting Gentiles; Lydia, who led a synagogue before becoming the first Christian convert in Europe and thereafter leading a church; Chloe, the head of a house-church; and Junia, the female apostle.

“The idea that only men were apostles, and therefore we have to follow Christ in letting men only be apostles, is a medieval idea,” Venne says. “We know Jesus’s disciples included women who traveled with him through Galilee; it’s in Luke 8. But more importantly, it was women who were faithful to Jesus after his male disciples fled once he was arrested.

“Women accompanied him to the cross, to the tomb, and were getting ready to embalm his body when they discovered the tomb was empty. In all four gospels it is said that Mary Magdalene was the one Jesus appeared to as the risen Christ. Magdalene and the other women were commissioned to tell the rest of the disciples that Jesus had risen,” Venne says. “The most important news, the core of our Christian faith, was entrusted to the women. But women can’t bring the good news? As ordained priests? It’s just crazy.”

I wish I knew how photoshop worked so I could put me in the background with a guitar.

I was visiting a friend who was doing volunteer work at the DM Catholic worker about 15 years ago. I remember leaving there feeling totally uncomfortable. The white haired guy (black shirt) in the back of this picture is a priest and kept emphasizing the word "she" in the closing hymn, The Lord of the Dance. "Dance, dance wherever you may be. I am the lord of the dance said SHE!" He was doing this while hopping on one foot, then another, to the beat of the hymn.