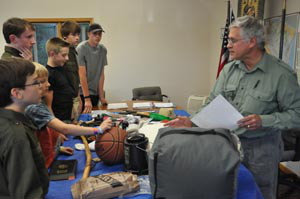 On a warm August night, a group of boys are rummaging through camping gear in the Farmington Town Hall.

“Sunglasses?” one asks. “Are they essential?”

The boys are cadets in the Troops of Saint George, an apostolate that pairs virtue and Catholic values with outdoor recreation and adventure.

Founded in 2013 by Dr. Taylor Marshall, a Texan and former Episcopalian priest who converted to Catholicism, the program is an opportunity for fathers and sons to bond, “to use the outdoors as our canvas and the sacraments as our path to light the way for the formation of Holy Catholic men and boys.”

Although the Troops are a fledgling organization, awareness of the program is spreading. The Polk County group is one of only two in the state – the other is in Kenosha – but the Twin Cities area is home to several troops.

Louisiana native Randy Borne is the captain of Troop 73, which meets twice monthly in the Town of Farmington, a few miles south of Osceola.

Borne’s son was in the Boy Scouts when, in 2013, the Boy Scouts of America changed its policy on homosexual members. He wanted his son in a program consistent with Catholic teaching, so when another parent passed him a sheet of paper with information on the Troops of Saint George, Borne was interested.

The Troops of Saint George have only two chapters in Wisconsin, there are several active and growing chapters in Minnesota.  https://troopsofsaintgeorge.org/find-a-troop/

In related news, the Diocese of La Crosse reiterated their support for The Boy Scouts of America in a recent issue of The Catholic Times.  They feel they will not be forced to capitulate and are given an exception under the latest BSA Adult Membership Resolution.


In the July 27 letter signed by NCCS(National Catholic Committee on Scouting) chairman Edward Martin and NCCS national chaplain, Father Michael Hanifin, the NCCS acknowledged the BSA’s reaffirmation of local autonomy in its policy statement while remaining cautious about how the policy will work in practice.