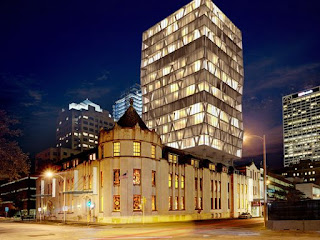 A developer is proceeding with plans to convert downtown Milwaukee's Humphrey Scottish Rite Masonic Center into a hotel, a project that would include a 14-story addition to the historic building.

Madison-based Ascendant Holdings Real Estate plans to buy the three-story Masonic Center, 790 N. Van Buren St., and convert it into the hotel's lobby, restaurant and meeting rooms, owner Eric Nordeen said Wednesday.
...
Scottish Rite wants to sell the building because the fraternal organization's dwindling membership can no longer afford to maintain it. Those ranks have dropped from 6,000 in 1985 to 700 today, of which just 100 are active members.

The building was constructed as a church in 1889 and became a Masonic facility in 1912, according to city historic preservation report. It was extensively remodeled in 1936 and includes an auditorium that is rented out for events.

Email ThisBlogThis!Share to TwitterShare to FacebookShare to Pinterest
Labels: Archdiocese of Milwaukee, Catholic Milwaukee, Freemasonry, The Masons made me do it