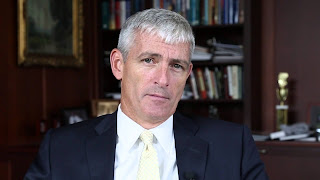 The attorney for a suspended Marquette University professor argued Thursday that dismissing his lawsuit against the university would mean academic freedom is illusory.

"Whatever the limits of academic freedom are, they haven't been transgressed here," said Rick Esenberg, whose conservative Wisconsin Institute for Law and Liberty represents John McAdams.

Last year, McAdams sued Marquette, claiming his two-semester suspension without pay for critically blogging about a graduate instructor in another department was a breach of his contract. After the 2014 post got traction on social media, people flooded the instructor with profane, offensive, threatening messages. She later transferred to another university.

On Thursday, attorneys for both sides were arguing the respective motions to be granted summary judgments in their favor before trial. The 90-minute session drew a packed gallery of spectators.

I wonder how much Marquette has spent on legal fees thus far....  $500k?  $1Mil??  More???  The case has been going on for two years now.  Maybe this was how they expected to punish McAdams all along, even if they knew they would likely lose in court at least they could drag him through the mud for a couple years anyway.

When McAdams wins, it would be fitting that Lovell has to issue him a public apology.
Posted by Badger Catholic at February 03, 2017

Marquette U. cares about two things: money, its basketball team and upper-middle class respectability...in that order. The faith, integrity, etc., are afterthoughts and even inconveniences.

Anonymous above you are so correct.....And Marquette should get rid of Lovell.

It's always more expensive to BRING a suit compared to DEFENDING a suit, so take the low-end guess on fees-to-date. But that number will jump when McAdams prevails, gets damages, AND attorney's fees.

Backing up a bit--it's not whether they keep Lovell, who is the very model of the Modern Secularist President. It's "why in Hell did they hire him in the first place?"

Yah, I know. He was what they wanted and no relocation expenses, to boot.

[A] "Lovell ... is the very model of the Modern Secularist President."