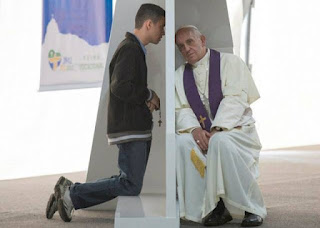 The 61-year-old Pewaukee priest accused of groping a teenage congregant while she was in a confessional with him has pleaded not guilty to sexually assaulting the girl.

The Rev. Chuck Hanel entered his plea Jan. 15 during his arraignment in Waukesha County Circuit Court, court records show. He stands accused of second-degree sexual assault of a child.

A 14-year-old girl reported to police in April that Hanel touched her breast and leg in a confessional at Queen of Apostles Church in December 2017, when she was 13.

Again, face to face confessions is a huge mistake.  If your church doesn't have screen confessions, go some other place.  If you are a priest and your church does not have a divided confessional, put one in.  Removing the confessional screen does nothing but expose penitent to potential abuse, and exposing the priest to a crime that he cannot defend himself against.

Anonymous: Not just a screen but totally separated compartments! The Confessional 'Seal' is under sever attack--a priest can clearly claim to know only the nature of a penitent's sins and not his/her identity if they are spacially and visually divided. Confessors are not therapists or lawyers; their job is to restore our souls to a state of Grace.