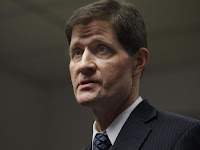 Milwaukee County District Attorney John Chisholm is calling for a statewide investigation of the Catholic Church's response to allegations of sexual abuse of minors, similar to the Pennsylvania probe that sparked a wave of inquiries across the country.

Chisholm said he would like to work with district attorneys around the state and newly elected Attorney General Josh Kaul to review all abuse allegations over the last 50 years. He said he would hope the state's bishops would voluntarily open their files.

If not, he said, he would be open to other mechanisms, such as a John Doe or grand jury proceeding.

Chisholm said he also would consider asking the U.S. Bankruptcy Court to share with authorities the names of more than 100 alleged offenders under seal as part of the now-closed Archdiocese of Milwaukee bankruptcy.

It's important to remember that John Chisholm is an unhinged lunatic.