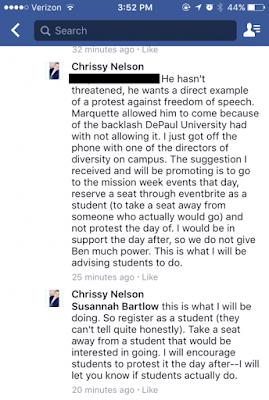 In a comment on a Facebook thread, Chrissy Nelson, listed online as a program assistant for Marquette’s Center for Gender and Sexuality Studies, alleges that a director of diversity on campus suggested to her in a phone conversation that people should reserve seats to the lecture through Eventbrite posing as students in order “to take a seat away from someone who would actually go.” Nelson wrote that she would be “promoting” this suggestion, actively impeding Marquette students’ ability to hear from a respected conservative voice.


In a subsequent comment Nelson continued to boast that she “will encourage students to protest” Shapiro’s lecture the day after it occurs.

Obviously Marquette's record on academic freedom is horrendous so we can add this one to the list as well.